Sunday was Remembrance Day in England, and Veteran’s Day in the U.S. These days honoring the men and women who serve their countries coincide with Armistice Day, always taking place on November 11. (I kind of had to look up all of that. Shame on me.)

I chose to take my mom to London Sunday simply because it’s easier to find parking at Epping station on the weekend and there was sun in the forecast. All I planned was to emerge from the Underground at Westminster so that her first glimpse of London would be of the Thames, the London Eye and Big Ben.

I knew nothing of the Remembrance Day parade or the Field of Remembrance at Westminster Abbey, which has been displayed annually by the Royal British Legion since 1928. 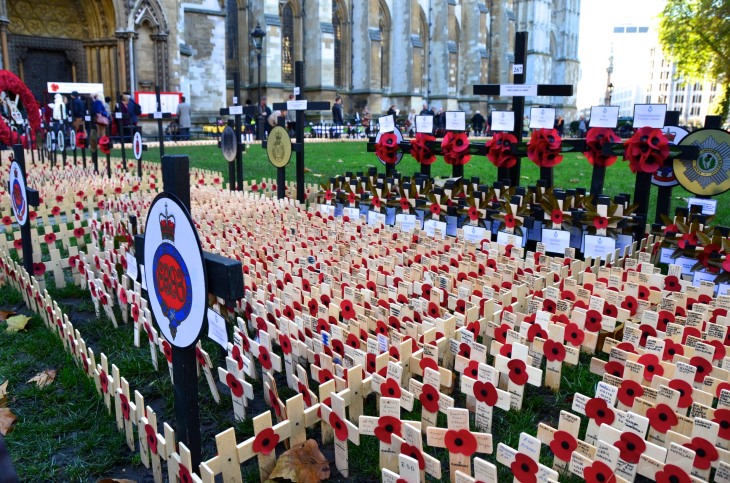 There is something so powerful in seeing row after row after row of paper poppies attached to the names and memories of individuals lost in war. Our visit was accompanied by a soundtrack of the Abbey’s ringing bells and  loud drum thumps from the parade. There was no traffic. Any conversation was a whisper.

These are just the fallen service members whose friends or family have paid to have a cross (or Star of David or Muslim crescent or a secular tribute) placed. In just one location! There are several Fields of Remembrance. And there are millions of other victims to the wars our world has endured.

A remembrance plot for U.S. Armed Forces was far from full, but there were service members represented from all of the last century’s wars.

Serving one’s country can come at a hefty price. If you’re enjoying a day off from work to observe Veteran’s Day in the U.S., please take a few moments to honor the veterans who have taken that risk to serve our country (and check out this post by John Adams of Operation Gratitude).

2 thoughts on “Remembrance Day in London Has Me Thinking of You, Veterans”

A Saturday trip to Sheringham beach as the tide went out, with obligatory ice cream, of course.
‘Scuse me while I creep around all the #dahlia gardens with my camera for the next few weeks.
Treasures & textures from Merlin’s Cave. The sea never ceases to amaze!
41 is nothing compared to 1000-year-old ruins. Time is the greatest gift, and I’m delighted to have another year of it in my collection. To life, friends! Feel that sun on your face, hear those leaves rustling in the breeze, fall into those hugs, and enjoy. 💕
Scenes from Penzance.
The boys & I made a little detour on our way home today! Albert told me he’s going to use his history smarts to write 16 novels.
Loading Comments...
%d bloggers like this: