Am I fashionably late to the Military Spouse Bloghop?

Friends & family who have no idea what I’m talking about… I’m doing some virtual networking! Cool, huh? (Have you ever heard of a bloghop? I think it’s great that household6diva.com and ridingtherollercoaster.com have organized this.)

Those of you who are here for the Bloghop, welcome!

Hi! I’m Lynn. You’ll find me around as “wanderlynn.” I promise I started writing this as soon as I heard about it two days ago, but then my toddler spiked a fever while my husband was TDY and friends from our last base rolled through town (from Hawaii, no less). But you know how that goes. 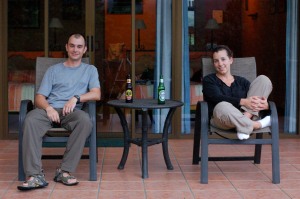 I met my husband just before he joined the Air Force. The idea of traveling the world was magical! Then we were stationed in Omaha, Nebraska, for our first six married years together. I worked in marketing and started this blog as a little thing to do for fun. (That’s us on vacation in Costa Rica 3 years ago, with no phones, internet or TV. We probably had just hiked a volcano. It was awesome.)

Then (just about) 18 months ago we had our (breathtakingly awesome) son. I refer to him as Prince Walls and other silly things that relate to his name but aren’t his name. One of my grandmas has warned me to “be careful” enough times in my life that sometimes I am. Though I’ve started blogging more in the mean time.

I’m from the Midwest. Somehow it didn’t occur to me that I would stay home with a kid… but I decided to for at least a few months after Slim Dub was born. Then… 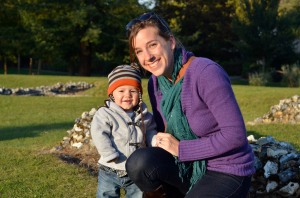 We PCSed to England a year ago. Not London, but you all probably get that. I am so glad to have the opportunity to be here!

We’re moving into a bigger house next month and I’m still in the Excited phase. We’ll see how I feel when we start packing. 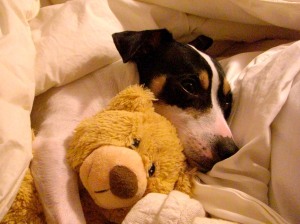 We have a dog named Plato. He’s ridiculous.

I like to see new places and am starting to figure out how to do it with a toddler in tow. I’m trying to get psyched about history, being in Europe and all, but I’d rather retreat into the woods (with coffee) most of the time. Unless we’re talking about food, in which case, I’m there. Especially if it’s at a farmers’ market.

I write about all of these things here (and post pictures of them over here), and I do hope you stick around! You can snag my RSS feed or sign up for email updates to the right. I do the Twitter, too.

And while you’re here, won’t you tell me a little about your blog in the comments? I’d love to connect.

Day E I G H T I can’t get too far from the table while the boys are doing their school work because they need something from me every 3 minutes or so. It’s too hard to write or read much with so many interruptions, and if I get into anything requiring too many supplies I become a distraction. So I’m going wayyyyyyy back to drawing. Also, I started a book club last month. Bad timing, except for Zoom. We had a great Zoom meeting discussing our first read, Spinning Silver by Naomi Novik, and just catching up with other adults. 🙌
Day S E V E N We sprung ahead overnight. Snow fell while I made pancakes. Hail fell over lunch. My legs are twitchy and my mood is grumbly (but that isn’t entirely due to quarantine). On the plus side: Lots of great calls with family now. And we’re saving a ton of money on gas, parking, meals, outings & travel. We have a great family Lego challenge underway, the kids have been doing Cosmic Kids Yoga for an hour and a half, and there are far fewer little socks balled up around the house!
Day S I X Weekly grocery shop today! I washed everything that could have potentially been exposed to the Coronavirus before putting away. Excessive? Perhaps. But what else do I have to rush off to? The reports from my friends still in Lombardia convince me I might as well take the precautions and do my part to potentially prevent the spread. Maybe sharing that I do this will convince YOU to do this, and together we’ll make a difference. We’ve been chatting with family over the past couple days. I love that we’re connecting more now 💜 I also hope they understand that I mean every word I say about the power of this pandemic. Please do all you can to stay home & limit your exposure to the community. If you’re not convinced, send me a private message and I’ll share the stories I’ve heard that make me a believer.
Day F I V E The oldest had a hard time concentrating on work because he misses his friends so much. We were able to do some video calls, then took a walk down the street to shout hello to friends from their driveway. The youngest likes to make family dessert on Fridays. Today was rocky road cookies. Thankfully I found a bag of flour I lost track of so we had enough for them and our challah 🙌