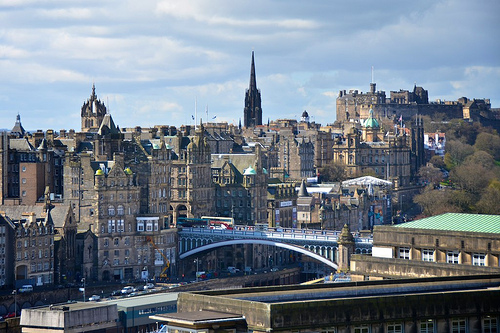 And now it’s time to share my photos and notes from Edinburgh!

Photo: Edinburgh, looking toward the castle from Calton Hill

When my husband registered for the Edinburgh Rock ‘n Roll Half Marathon, I knew it was his way of making sure we made it to Scotland. I knew he needed to break my paralyzing fear of a “vacation” that would be anything but fun because we’re parents now. In my mind, “vacation” would be an emotional ride equivalent to a Great Plains springtime – the sirens are always going off and sometimes the storm hits with 100 mph straight-line winds. (Yes, I speak from experience.)

I think he also figured I had finally recovered from The Move and my attitude might just be a little more appropriate for a big adventure. Maybe he also knew that there were coffee shops around every turn.

And this is why I love him.

We drove from Bury St. Edmunds to Edinburgh, by way of an AAFES gas stop at RAF Menwith Hill, in one day. Rapeseed fields were beginning to bloom here and there, with blankets of lemon yellow popping up over that horizon, behind that hill, here, quick! on that side of the road.

Photo: somewhere near Scotland, the sea to the left, a rapeseed field in bloom to the right.

Near Harrogate the hills began to undulate more, dotted with sheep and frolicking lambs (seriously, if you were ever to see something frolic, it would be an itty bitty lamb), and braced with the low stone walls you imagine when you think of rural Britain. The grass and fields were such a rich, bright green that the bitter wind seemed carry a new breath of life from it.

Eventually A1 sidled up to the coast, giving way to occasional glimpses of the North Sea and a far-off abandoned seaside castle. Then we crossed into Scotland, where we were rather unceremoniously welcomed by a large metal graphic sign you would expect from Tennessee. Then there were the cliffs, the magnificent walls of rock that hold back the sea. Then more rolling hills and sheep for a while… then Edinburgh!

It was sheer coincidence that our hotel was in the perfect location for us. We were just a short walk from the race start/finish line in Holyrood Park and The Royal Mile, a stretch of city popular with tourists because of its concentration of sights such as St. Giles Cathedral, statues of David Hume and Adam Smith, the castle and more.

We were near the Scottish Parliament and Holyrood Palace. Parliament is a rather new building with very modern, artistic architecture. It was a strange but attractive contrast to the historic buildings of the Mile. We chose not to tour either of these places, but would have if it rained while we were there.

Just behind Holyrood Palace (and just minutes from our hotel) is a park that surrounds Arthur’s Seat, the highest point in Edinburgh. We strapped the kid into the backpack and made the trek to the top. The views of the city and the Firth of Forth were just stunning, particularly with so much sun shining on it all. A word to the wise: it’s a bit strenuous to get there (especially if you take the long way, ahem). The trail ends at the base of a mass of rock that you have to scale to reach the top.

Also, “sunny” and “Scotland” are rarely in the same sentence without the word “not.” So… expect mud and slippery rocks.

Photo: view over Holyrood Park from the long trail to Arthur’s Seat.

We were given a 50% discount on admission to the Edinburgh Castle with our English Heritage memberships. Sadly this was the part of the trip that was most true to my expectations, as our little guy refused to nap at the hotel that afternoon because he could hear cement mixers backing up our street. That is to say, I didn’t get much out of it, other than a tasty snack and coffee. The war memorial was beautiful, but it was hard to give it proper attention with a child who wanted to test the acoustics.

At least he liked counting the cannons and the occasional stray rock on the ground.

I found it fascinating how this part of Edinburgh is situated on many layers. As in, as you can drive up one street, and there’s a whole set of shops and restaurants accessible by a footpath a few stories up, which are topped by other shops and restaurants that are accessible from a street on the other side. There are also many paths that cut under and between buildings, so you may be much closer than you realize to some place you’re trying to find.

The Grassmarket is an area several levels below the castle, where public executions used to take place. (You just have to take one look at the square to assume it, really.) There are a variety of restaurants, pubs and some off-beat shops there worth checking out.

(No picture here – it was actually raining as we rushed out the door when Little Mister wasn’t napping, so silly me thought I ought to leave it behind. Doh.)

I miss Omaha’s Farmer’s Market in a severe way. “But there’s a market in your town twice a week!,” you say. My response: they don’t sell appliance-sized ladies’ underwear at a farmer’s market.

It wasn’t huge, but there was a nice variety: meats, poultry, fish, smoked fish, jams, cheeses, chocolate, bread, produce, pies, coffee, burgers, brunch… all quietly tucked away behind the castle in the area called Castle Terrace, on the level between the castle and Grassmarket.

I walked off with a bag full of goodies (including organic chocolate and Scottish tablet!) and a pain in my cheeks from the giant smile I couldn’t shake. We decided the smile increased in size each time someone said “wee” appropriately.

Edinburgh’s first public park is not only the second highest point in the city, but the hill with all of the monuments. You’ll find the National Monument, a monument to Admiral Nelson, the Dugald Stewart monument, an observatory, etc. etc., and more lovely views of the city and water from Calton Hill.

Photo: Calton Hill – too many monuments to remember!

Photo: view of New Town and Firth of Forth from Calton Hill

The most I imagine myself EVER running is MAYBE 5 miles. So, I’m proud of my husband for turning out a good time and also running 13.1 miles straight (including the part the emcee described as where “you’re in hell, and you turn into hell”). It seemed like a fun event for the participants (except for the hell part), with music at every mile to pump them up. Me, I enjoyed my coffee from the sidelines. Our little guy was a very good Dad spotter and enjoyed dancing at the finish line.

Near the castle is what my husband once described to me as kind of a “Love Boat” ride about whisky. But cool. And it was how he wanted to celebrate completing the run. The whole family buckled in to a giant barrel at The Scotch Whisky Experience and rolled through an artful audio/visual description of how whisky is made. Our little man enjoyed the lights and sounds, and though we didn’t learn anything new (thanks to our time under the tutelage of Monique Huston during her time at the Dundee Dell), we enjoyed the show and the tasting at the end. (I still have a taste for expensive sherry-finished single malts from Speyside, if you care to know.)

Of course we had to stop at Royal Mile Whiskies for “the promotion bottle” my husband has been looking forward to… and a few more.

It was a great family trip, and I look forward to a chance to go back and explore more!

Looking for more travel ideas? Check out Costa Rica and Italy. Or, if you’re a petrified parent who would love to go some place if it didn’t seem like getting there might ruin you, pick up a tip or two about flying or taking a road trip with a toddler.

All photos copyright Lynn Beha 2012. Please don’t use without permission!

One thought on “Edinburgh, Scotland”

A Saturday trip to Sheringham beach as the tide went out, with obligatory ice cream, of course.
‘Scuse me while I creep around all the #dahlia gardens with my camera for the next few weeks.
Treasures & textures from Merlin’s Cave. The sea never ceases to amaze!
41 is nothing compared to 1000-year-old ruins. Time is the greatest gift, and I’m delighted to have another year of it in my collection. To life, friends! Feel that sun on your face, hear those leaves rustling in the breeze, fall into those hugs, and enjoy. 💕
Scenes from Penzance.
The boys & I made a little detour on our way home today! Albert told me he’s going to use his history smarts to write 16 novels.
%d bloggers like this: